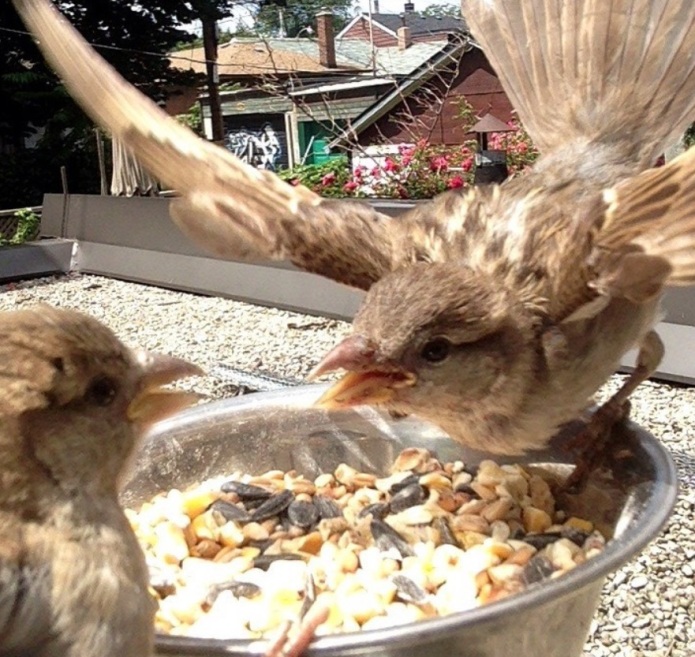 2014 Toronto Bird Photo Booth Business Challenge is the original bird ‘selfie’ portrait contest that was made back in May 2014 to showcase custom loyalty program software through storytelling, and is not a true photo contest, but more like a friendly match between businesses hosting the booth.

What is the Toronto Bird Photo Booth? If you don’t know already, a bird photo booth is a feeder attached to a digital camera, triggered by a motion detector. Its a wonderful piece of technology that makes art to serve nature.

There are two cameras here – one is an iPhone 5C purchased by John Conn of Standard Telecom, office phones service in Toronto who hosted Week Three,  and the other is the WIngscapes BirdPro trail cam which is a handy back-up unit.

Would you like to host the Toronto Bird Photo Booth for a week on your GTA business property?

The rig is programmed to take pictures of any wild birds that land at the feeder. The idea is to see who has the best wild birds. Businesses hosting the Toronto Bird Photo Booth can enter their pics into the friendly bird portrait photo contest for prizes.

SMOJoe launches Birds of Toronto, and now I chronicle developments on the blog and also write weekly Bird Photo Booth updates for Toronto is Awesome magazine.

Look below at this English sparrow that thinks its a terrifying huge hawk; its emulating some larger bird of prey as it tries to scare away another fellow from the feeder.

Like any playground, It isn’t long before an even meaner House sparrow with a distinctive white stripe on his wings appears to scare everyone away for a spell. You’ve never seen these tiny birds up close like this! I’ve gained a new appreciation for these sparrows by seeing them so close and full of emotion, and I imagine these birds are reacting the same way humans would fight over a big pile of cash left in the street.

These birds really do have lots of have personality ! See again how white stripes simply refuses to share the bowl.

This storytelling started back in June and the photography is getting better each week.

The Toronto Bird Photo Booth Challenge was on Bird Canada, last week. This story is where tech meets nature and the arrangement yields visually stimulating content. Each update chronicles the last host’s contributions, and features a new competitor’s story alongside their gallery of pictures.  At the end of the summer, Judges will review the best photos and reward the best ‘birders’ among the people who positioned the cameras . And there will be prizes. TBD